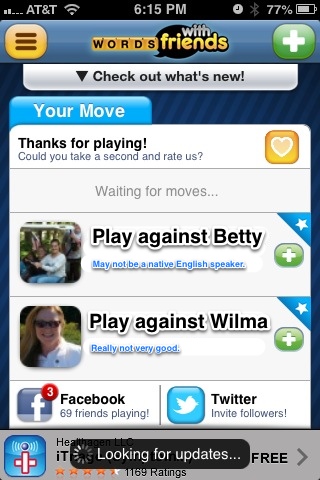 By James at November 25, 2012 No comments:
Email ThisBlogThis!Share to TwitterShare to FacebookShare to Pinterest

I was in a big 2-hour meeting this morning when my phone rang.  It was the city-wide alert system, but I figured it was just reminding me to vote, so I ignored it.

So I kept checking the district website during the meeting.  In less than an hour, the nearby high school was also in lockdown and suddenly a ring was being drawn around our neighborhood.  And I saw from Facebook that others had seen at least 9 police cars race down the street when they were dropping off their child.

A while later, an all-clear posted on the district website and a an all-clear call I wasn't able to get in time, but which also got voicemailed, transcribed and emailed to me.  By then, the meeting was over and I was able to go to a local newspaper website (how will we get our local news once the newspapers have all died?) and learn that two burglars had robbed a house in our neighborhood and the car was seen at a second house where the police apprehended one of the burglars and the stolen car and were looking for the other burglar.

So all that for a pair of robberies.  That's great, I mean, that kind of thing just does not happen in our neighborhood, and it's cool that they were that on top of things, but in the end, it was a situation that could have happened and gotten all resolved without me knowing and been blissfully unaware.
By James at November 06, 2012 No comments:
Email ThisBlogThis!Share to TwitterShare to FacebookShare to Pinterest

Is this Google stuffing the ballot box? 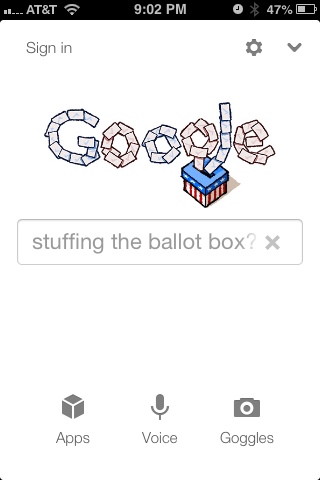 By James at November 05, 2012 No comments:
Email ThisBlogThis!Share to TwitterShare to FacebookShare to Pinterest
Labels: funny, Google

Barely did we all get well when sickness returned.  At least three of us had bits of that long cold that lingered for really long.  But we'd all gotten back to decent health.  But now Ben's got a fever.  We took him to the doctor's this morning and she did the checks of his heart and lungs and peered into his ears before getting out the tongue depressor (do tongue depressors grow up thinking they're going to be Popsicle sticks only to wake one day to the cruel reality of their career path?) and peering down Ben's throat.  As soon as she did, she kicked off and wheeled that little wheely chair backwards away from him really fast while exclaiming that he was definitely sick - little white bumps on his throat.

So, a nurse was called in and together, with Lori restraining Ben, they took a culture.  The rapid test came back negative for strep so now the longer test must be done we'll learn on Monday what's going on.  In the meantime, a cycle of fevers and over-the-counter medication to make him feel better.

The absolute worst part is that he's unable to even tell us how or where he hurts - just that he feels "yucky." and we're unable to convince him that the medicine will help so every adminstration (via dropper into his mouth) is a struggle where one of us has to hold him in place with his arms restrained just so the other can give him the medicine.  Of course, within 10-15 minutes the fever drops and he's giggling and laughing, but he's not making the connection with the medicine this time around.

By James at November 03, 2012 No comments:
Email ThisBlogThis!Share to TwitterShare to FacebookShare to Pinterest

I went out there yesterday and just decided to run.  Did the loop around the lake, 2.7 miles.  First run in a really long time.  Today, I looked at the rain and decided I didn't want to run in that.  So, walked down the stairs and out of the building for a walk and realized, I didn't even want to walk.  I did, but man, I'm really sore from yesterday's run.  Hopefully I'll still do another run soon.  It's the danger season with Halloween candy, Thanksgiving and Christmas treats all in the immediate future.  I need to run or else I'm gonna have even farther to go next year.  It's so tough.  I just need to get to my goal weight because then my available calories each day go up.  Then it might be easier to start tracking consistently again.
By James at November 02, 2012 No comments:
Email ThisBlogThis!Share to TwitterShare to FacebookShare to Pinterest
Labels: diet/exercise, rain

No Love for the Elevator

So my elevator theory was completely wrong.  People who take the elevator are anti-social grumpy people with frowns who don't want to engage or even make eye contact.  But mostly, I end up riding the elevator solo and just wasting electricity and not getting any health benefits.

Turns out the stairs was the right approach after all.  Lots of eye contact, lots of smiles, and actually more time to interact as one is going up and the other going down.   And I've had a few times recently where I've ended up doing a couple of West Wing walk-and-talks down or up the stairs with people.

So back to the stairs for me.