Update 10/27/2014 - And now it's gone. As of today, Facebook's forwarding all @facebook.com emails to my email address on file.  Below is my original post from 2010 which remains one of the all-time top viewed blog posts, but everything below is now outdated.  Please see my 2014 Update.

So I got into the early testing of Facebook messaging, so I added my address to our mailing address at work.  (Click on any image to enlarge.)

New emails arrive in the "other" folder which is not visible when you first arrive at Facebook.  Does not appear in the dropdown from the message icon above and there's no indication of the new message 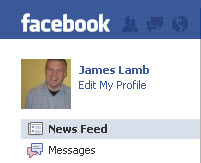 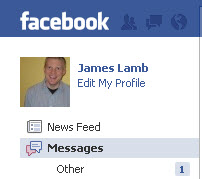 I tried to duplicate by sending myself an email from a number of different personal email accounts, but since Facebook knows them all, it kept showing up in the main messages area.   I tried my cell phone and that one successfully made it into the "Other" folder:

Most interesting was the little yellow icon that appeared next to the email address.  (It does not appear next to the one sent by my organization, via ExactTarget.)

Hovering over the warning gets a small pop-up that's cut-off in Google Chrome:

Anyhow, on to the main event, the reason you're here...

As I was mentioning, the email arrives in "Other" with a generic icon and a limited amount of text (from the text-version of your email) visible, even though in my case it could have shown more when I maximized my browser.

Clicking in, I see the same generic icon and the first bit of text from the text-version.  The quick-reply feature is enabled and ready to go, the focus of the cursor already in the box. 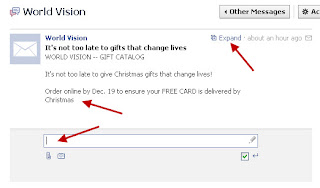 I did reply back, but I haven't received the response from our Donor Service team yet to see what the response looks like.  But, one thing is for sure - make sure you're watching the reply box and treating emails like part of a conversation. 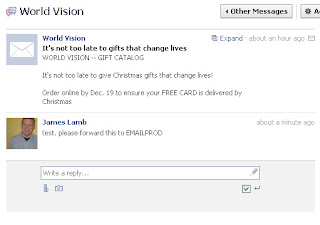 The "Expand" button in the top right corner brings up the original HTML email in a lightbox.  Everything looked fine (the fact that header extends beyond the light blue bar is a design choice, not a rendering flaw), except that our email wasn't wrapped in gray as designed.  (Which is why you get those two fake corners.)

At 600 pixels, our email seems to fit perfectly.  I don't know if the box expands or contracts in width for other sized emails. 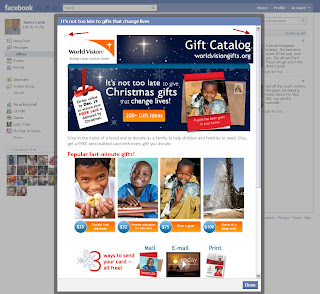 All of the links clicked through as expected, except a mail-to link -- that spawned my corporate email program, instead of opening a new window in Facebook and letting me reply from there.   That means if I did reply, it would come from a different address than the one that this email was sent to -- and without anything from the original email to help identify what it was in response to.  This will be a problem if anyone clicks the link because they want to complain and unsubscribe or have Donor Service issues they need help with.

At the moment, my @facebook.com address is the only one we have on file, but I wouldn't be surprised if that grows over time as more people get access to the new system.  (By the way, I have four more invites available.  I'll give to the first four people to come find me on Facebook.)
By James Lamb / tvjames at December 13, 2010
Email ThisBlogThis!Share to TwitterShare to FacebookShare to Pinterest
Labels: email, work