How Not to Unsub 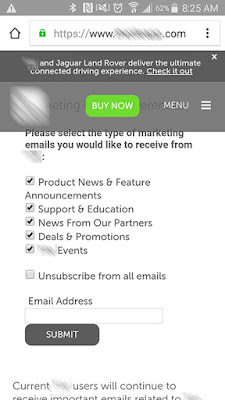 I received a product recently and apparently it came with an overaggressive email campaign trying to sell me even more of them.

I finally had enough and clicked the Unsubscribe button.

First, extra advertising pushed down the navigation to where it covers part of the instructions.  You can still figure out what's going on, but it's sloppy and maybe not well tested.  (Yeah, I know the Jaguar/Land Rover integration is a huge deal, but still...)

Second, I don't know what kind of emails it was that I was receiving too many of, so how would I know which one I was getting too many of.  Easiest solution - check the box that says "Unsubscribe from all emails"

Third, making us type in our email address again.  That's a poor user experience.  It probably just strengthens our resolve and affirms our choice to just stop all of it right now.

Honorable mention: Hiding "News From Our Partners" in the middle of the deck. What is that? Emails from Jaguar/Land Rover (no thanks, Tesla or the bus, yo) or just anyone who wants to pay to have this company send me emails.

I bet if they were to look at their stats, they probably don't have too many people opting-down (leaving a few things unchecked) - that most of the people who complete this page hit that "Unsubscribe from all emails" checkbox.  Although if they didn't fix the checkboxes, it's in their best interest not to fill in the email address or they'll just lose people even quicker.
By James at May 20, 2016 No comments:
Email ThisBlogThis!Share to TwitterShare to FacebookShare to Pinterest
Labels: email
Newer Posts Older Posts Home
Subscribe to: Posts (Atom)